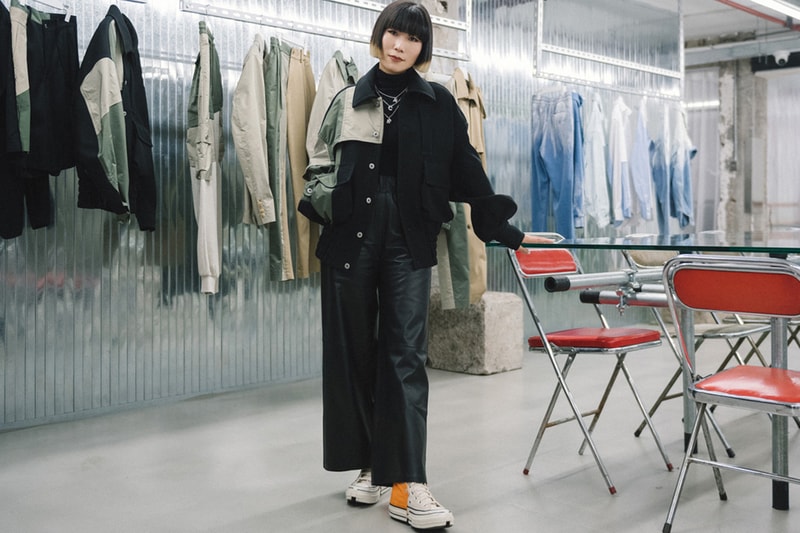 Feng Chen Wang began her career in menswear in 2015, after graduating from London’s Royal College of Art (RCA) as a menswear fashion design major. She made her runway debut at a VFiles runway show during 2016’s New York Fashion Week, and in the years since, has racked up a nomination for the LVMH Prize and several high-profile collaborations with Air Jordan, Converse and Levi’s. For her eponymous label, Feng applies her self-described “future-modern” and “multidimensional” point of view to technical outerwear and hybridized collections of suiting-meets-sportswear garments which toy with asymmetry and deconstruction.

Following her Spring/Summer 2018 “Made In China” collection, Feng started work on her second studio, located in the Huangpu District of Shanghai (the first studio is located in London): a move motivated in part by establishing an international footprint for the brand. She and her team moved into the space in May 2019.

Feng says the building was formerly used for manufacturing mobile phone parts. When she took over the space, she began by opening up the floorplan and starting again from scratch. “The design of the entire space and some furniture and decorations were done by ourselves. I quite believe in Chinese feng shui. This is our feng shui treasure,” she explains. The roughly 6,400 square-foot studio has a clean, industrial feel, allowing the artworks and garments to take center stage. The white walls are punctuated with concrete beams, exposed pipes, accents of reflective metal plating and a cement gray floor. For its decor, Feng chose a combination of Chinese furniture and contemporary art works. “You can see that our studio is not entirely Western, nor is it entirely Chinese traditional. The two are intertwined and integrated. I hope these things can help people feel my own preferences and tastes.”

The roughly 6,400 square-foot studio has a clean, industrial feel, allowing the artworks and garments to take center stage. The white walls are punctuated with concrete beams, exposed pipes, accents of reflective metal plating and a cement gray floor. For its decor, Feng chose a combination of Chinese furniture and contemporary art works. “You can see that our studio is not entirely Western, nor is it entirely Chinese traditional. The two are intertwined and integrated. I hope these things can help people feel my own preferences and tastes.”

HYPEBEAST visited the Feng’s Shanghai studio to learn how she started her brand, where she finds inspiration and leading her team under a unified vision. After graduating from RCA, what was the process of founding your brand?

Feng Chen Wang: I graduated from RCA in 2015. After graduation, I didn’t think about launching my own brand right away, even though I was rated among the top five in my year by the media. At that time, I also received an offer from a luxury brand.

The main reason why Feng Chen Wang could be successfully founded is that after I graduated, I showed during New York Fashion Week in September. The show was very successful and received a very good response. I’m also grateful to Virgil [Abloh], because Virgil was one of the mentors VFiles invited to the show, and he chose [to mentor] me.

“I only set up a studio in China after the Spring/Summer 2018 [Made in China] season. I think this connection is very interesting.”

At New York Fashion Week, I continued my design from the graduation show exhibition, showing several sets of my graduation series (“LIFE & LOVE”). Many people said they liked it very much, and they all came to ask who this person was and wanted to interview me. The brand went from a few fans among friends to skyrocketing overnight, and then a lot of orders came in. New York Fashion Week, the show and the entire VFiles team gave me a lot of confidence and help.

After returning to London from New York, I started to officially operate my own brand. At that time, the London platforms also helped me a lot, like Fashion East. Because I am an independent designer, I didn’t have much money or work experience when I started. The help and recognition given at that time feels very pure, because these recognitions come with the weight of the entire international fashion industry behind them. At the same time, this kind of beginning also gave our brand a very global start. What were some key moments in the brand’s development?

The “Made in China” collection from Spring/Summer 2018 is particularly important to Feng Chen Wang; this was the first show of our brand alone.

I think it defines many things, including the Feng Chen Wang redefinition of “made in China.” At that time, many people thought that “made in China” represented something cheap, and no one could present the word “China” so proudly. So I thought I could do something with this theme. At that time, some media actually persuaded me that you might be “the first one to eat crabs,” but I didn’t think about it that much. I thought, it’s okay, I don’t care. All I have to do is to show it.

It was also the first time my work was included in Vogue Runway. This was very important to our brand; it’s like leaving a mark in history. It also gives Feng Chen Wang a particularly good place at the international level, lays the foundation. I only set up a studio in China after the Spring/Summer 2018 season. I think this connection is very interesting.

“I respect everyone’s creativity and work very much, and I cherish talent.”

How many people are there in the entire team?

We currently have about 30 people on the London and Shanghai teams. I think Feng Chen Wang wants to be an international brand, so the entire team must be internationalized. And because of my own growth and learning background, the things I like and my designs are both Eastern and Western. This requires people from different countries in my team. In addition to the in-house team, we also work with people from different cultural backgrounds all over the world.

Has the COVID-19 pandemic impacted your team?

There’s been some influence. For example, the London team is now work-from-home, and some personnel have gone, but the key members are still there. In fact, many people have asked me whether I’d consider closing the London studio, because the cost is high, but I think I have to stick to it. I respect everyone’s creativity and work very much, and I cherish talent. I try my best to [support] all my teams. Are there any differences in working styles between the London and Shanghai teams?

How do you promote cohesion across both teams? Do you have any hobbies or creative outlets outside of your work?

In the U.K., I spent every weekend in museums, bookstores, vintage shops and weekend markets. I like to collect things, but I don’t use it in my designs. It’s for learning.

Do you have any plans for personal work, in addition to being a designer?

After coming back to China in 2020, I feel that I will be digging into myself more. I also hope that some more personal things besides the brand can develop well. When I was at RCA, we were trying different projects, so now I’m looking forward to some cross-disciplinary creations. I am very open to accepting any challenge, even now. Give me anything that has nothing to do with me at all.

“Every action you take, every project you have, every show, all the music you choose, every team you choose, etc., should set up your DNA.”

For example, when I directed a film, I wrote the entire script, found all the ideas, did all the creative direction, figured out how to make the movie from beginning to end, just the same as when I was designing. In addition, some people have invited me to be an architect, to renovate a building, some people asked me to design a car and so on.

I don’t just define myself as a fashion designer, I think I am also a creative director.

What works do you currently have in progress?

I can show you a pattern, although this is still in testing and not the final version. This will be presented in our next season, with some Chinese patterns redesigned. These next works, we will have more diversified, richer, and fundamental elements of “made in China,” not just a slogan. Do you have any advice you can share about branding, operations and management?

Actually, I am not particularly good at the specific execution of management and operations. We are still learning. I also rely on the consciousness and initiative of the entire team.

But I think one experience I can share as a leader is that you must have your vision. That is, you must know clearly where you want to take the team, what you want to do and what you want to become in three, five, ten years. During the whole process, you give them support and confidence. and gradually they may break through their potential and do better.

For example, I know very clearly that I want Feng Chen Wang to be an international Chinese design brand. Every action you take, every project you have, every show, all the music you choose, every team you choose, etc., should set up your DNA. I think this is more important than management, because the important thing for a small team is that everyone loves the industry, has the passion for it.

Do you have any plans to open Feng Chen Wang’s first store?

I think within two years. I’m already looking for a place.

During the studio visit, Feng also showed us various objects from her personal collections. Chinese artist Yan Lei started to create the “Color Wheel” series of works in 2002, and the artist gifted several to Feng. “Him and I were quite destined friends,” she says. “I originally wanted to hang it, but this one is very big, and it turns out that it’s not suitable to hang it anywhere. So for the time being, I’ve kept it on the ground.” This piece is from Feng’s collection of cultural and creative artworks, created with the same technique used for lacquerware. “I think they are also very Feng Chen Wang. I think if I have the opportunity, I hope to develop some of these in the future.” “I like visiting vintage stores very much. Basically, I go to the vintage store and weekend market every place I go,” she says. This selection of particular favorite pieces dates back to the 1960s and 1980s. “Some cups were brought from the UK, and then I also bought a lot of tableware from the old Shanghai period.” This seal, crafted from Shoushan stone, was produced in Fuzhou: Feng’s hometown. “I like traditional Chinese things very much, and this seal is also very meaningful to me,” she says. “In fact, the whole concept of ‘Made In China’ in 2018 is also a ‘seal.’ Everything is connected. This one will also be used in my future designs.” “These stones are left over from some of our previous buildings. There is also a sculpture of Crouching Tiger, Hidden Dragon on them. But I did not buy them from the perspective of collecting antiques. I think they are beautiful and can give me a little inspiration for my design,” Feng says.