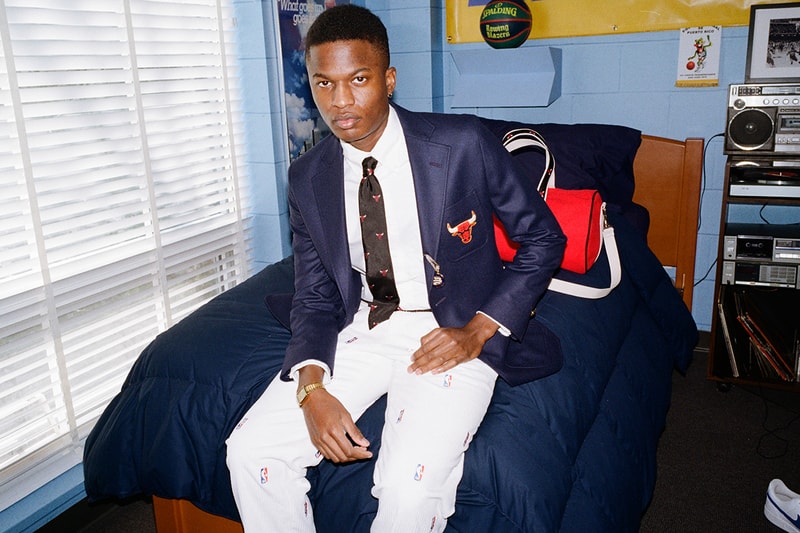 Jack Carlson’s collegiate-inspired, New York-based label Rowing Blazers is known for its well-referenced collections, having delivered everything from a homage to Princess Diana to pieces featuring Babar the Elephant in recent months. Now, the imprint is back with its biggest slam dunk collaboration yet, tapping the NBA for an extensive capsule.

Throughout the collaboration, you’ll find references to the New York Knicks, Brooklyn Nets, Boston Celtics, Chicago Bulls, Los Angeles Lakers, Golden State Warriors, as well as the league’s logo, taking form on Rowing Blazers’ signature designs such as rugby shirts, suit jackets, sweaters, and trousers. Alongside this, the duo has teamed up to further advance the inherent collegiate aesthetic with a range of school-boy scarves, banker bags, belts, and of course, an official Spalding NBA basketball that’s been given the full Rowing Blazers stripe experience.

Naturally, Carlson took inspiration from collegiate uniforms in the ’60s and up to the ’90s, while also paying close attention to the 1965 Japanese book Take Ivy. Speaking on the collection, Carlson said, “The book was created by a group of Japanese guys who came over to the U.S. in the early ’60s. They photographed American college kids in their natural habitat and inadvertently created a style bible. For the Rowing Blazers x NBA collection, I looked at Take Ivy, and I also looked at how some of my all-time favorite NBA players were dressing when they were in college. I thought about the kinds of things I like to wear, and just wanted to make timeless, elevated pieces, inspired by old-school Americana but luxe and really well made.”

The result is nothing short of excellence. Its blazers that feature the basketball teams’ logos on the left-side chest pocket alongside trinket details are ever-so ’60s collegiate, as are the NBA logo-covered white corduroy pants. Intarsia sweaters in navy and cream with the NBA logo on them are perfect for something formal to wear courtside, while a variety of branded sweats offer you a more relaxed and game-ready aesthetic.

Rowing Blazers’ NBA capsule collection, which is for both men and women, is available on Rowing Blazers’ website now. Prices range from $40 USD to $895 USD. Take a closer look at the lookbook above, which is set in a meticulous recreation of Michael Jordan’s freshman dorm room.

In other news, here are eight more drops you don’t want to miss this week.